The group, which consists of best friends and brothers, Jean Paul Makhlouf, Alex Makhlouf and Samuel Frisch first made their way into the hearts of core dance music enthusiasts with their vibrant remixes for the likes of Nicky Romero ("Symphonica"), Capital Cities ("Safe And Sound"), Vicetone (Heartbeat ft. Collin McLoughlin) and Krewella ("Alive"); as well as Bruno Mars (Treasure), Calvin Harris (Lets Go ft. Ne-Yo) and Nervo & Hook N Sling (Reason), several which have reigned on the Hype Machine charts.

But the trio truly impresses with their originally produced material, including Krewellas next single, "Live For the Night," coming just before their first official Big Beat release, "Take Me Home" ft. Bebe Rexha, dropping on July 16th along with a remix package to all digital retailers. The track recently premiered during the trios guest mix on Nicky Romero's Protocol Radio Sirius/XM Radio show and officially debuted on BPM, hailed as the best new track heard in a long time by host, Austin Kramer.

Don't miss this opportunity to catch Cash Cash at this exclusive Atlanta performance! Tickets for this event will sell out! Get yours now! Initial release tickets are available starting at just $15! 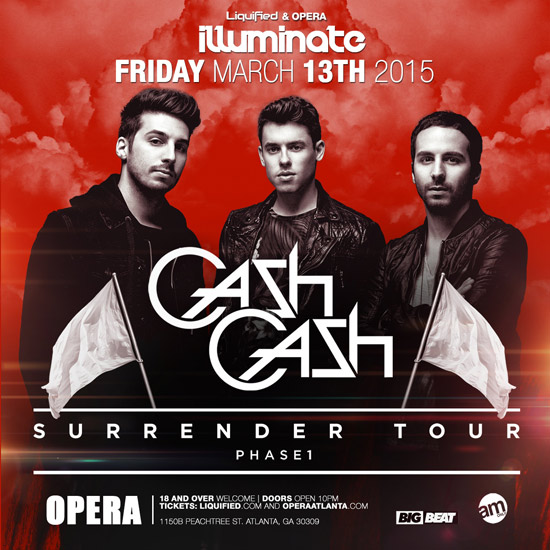