Growing up on a goat farm in the desert of Arizona might not be considered the typical American upbringing for the next big DJ and producer, but then again Ghastly isnt your typical American artist. Many have described the genre bending musician as a partially insane young man with a dark sense of humor. Politely abominable and casually destructive, he wields the catch phrase born to die as a mantra to his chaotic lifestyle. His sets have been heralded as Energetic and eclectic live performances which are sometimes followed by odd speeches about the abnormalities of life, regretful sexual encounters, and well cooked food. With such a diverse personality and rapport for his fans, its clear that Ghastly has one thing on his mind, and that's to change the world.

Since 2009 Tony Fresch has made a name for himself as one of the most distinguished up and coming DJs and producers in the LA edm scene. He has played at some of the most well known clubs in California including The Avalon, Club Nokia, The Key Club and Dim Mak Studios. He has opened for the likes of Steve Aoki, Diplo, Rusko, and Dillon Francis, among others. In 2011 his remix of Chromeo's "Hot Mess" under the alias Rolex was chosen as a winner in Turbo Recordings' official remix contest and was released on Turbo Recordings' Hot Mess Remix EP. In 2011 and 2012 Tony won the title of "Best College DJ in LA" in a live contest vote. Tony has recently developed the deeper alias "Dr. Fresch" and has released two acclaimed remixes for indie rock bands Y LUV and Kiven. The debut Dr. Fresch EP, "Fantasy / Ecstasy," was released on Prep School Recordings in June.

Illuminate is the largest weekly 18+ electronic dance party in the southeast. Featuring world-class electro, house, and dubstep acts on our dazzling LED light production and top-of-the-line sound system, come join us every friday to ILLUMINATE your nightlife experience.

Don't miss this opportunity to catch Ghastly + DJ Fresch at this exclusive Atlanta performance! Tickets for this event will sell out! Get yours now! Initial release tickets are available starting at just $15! 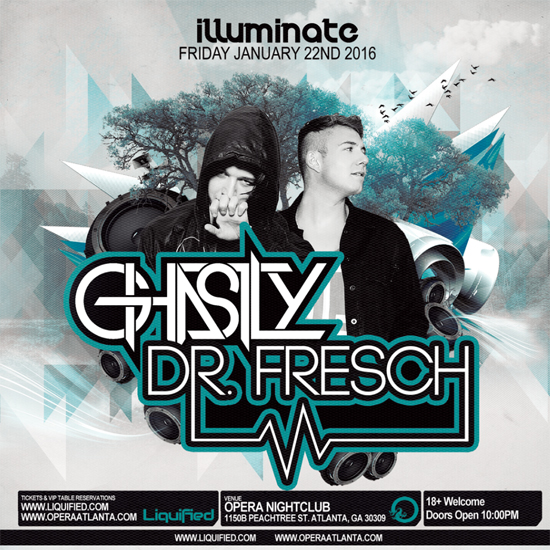