Halogen is a duo that is steadily rising in the Atlanta EDM scene. Having played alongside many of the current EDM frontrunners and acquiring major support from them along the way - they have managed to become one of the most respected unsigned artists in the southeast.

Atlanta based duo Pyramid Scheme emerged in early 2014 and immediately started crushing stages, from their very first live appearance as direct support for Zeds Dead at The Republik in Honolulu Hawaii to their now residency at Opera Nightclub hosted by Liquified. In less than a year since founding Pyramid Scheme the boys have dominated Soundcloud with every release and seen near 200,000 plays on their personal uploads alone. Geared up and ready for 2015 Pyramid Scheme will be releasing original collabs with Trinidad James, MK Ultra and Brooklynn to start off the new year. Pyramid Scheme of course continues to break all the rules by releasing music in any genre they see fit from Big Room House, Indie Progressive, Deep House, Future House, R&B, Trap, Rap, Twerk, Rock, Pop and anything else that spills out of their artistic creations. Pyramid Scheme Live is an entertainment performance designed to capture fans in eras of music they havent revisited in years and mold them harmonically into new age dance weapons. Pyramid Scheme takes their live mashups to a new level to ensure they reach every fan in the crowd and leave them with memories of one of the wildest parties they have ever experienced.

Don't miss this opportunity to catch Halogen, Pyramid Scheme & Merrick at this exclusive Atlanta performance! Tickets for this event will sell out! Get yours now! Initial release tickets are available starting at just $15! 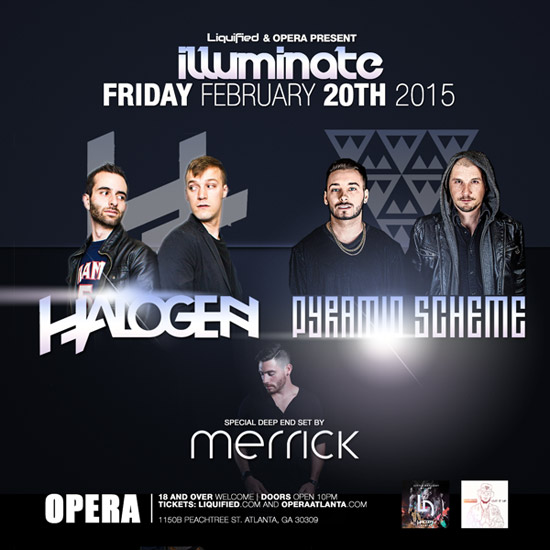