Henry Fong is an EDM DJ/producer originally from West Palm Beach, Florida. He began DJing during his college years at the University of Central Florida, and held various residencies and promoted at local clubs in Orlando, FL. After graduation from the college, he moved to Los Angeles to focus on music production. He has since released on record labels such as Spinnin, Revealed, OWSLA, Mad Decent, Dim Mak, and in 2015 started his own imprint Banzai Recs. He is known infusing styles such as reggae/dancehall and Melbourne Bounce into high energy EDM tracks. Stand out songs include 'Scream', 'Encore', 'Stand Up', 'Wine Dem', 'Bust Dem', and 'Ass Up'.

Bad Royale are the new kings on the Mad Decent block, but as a group of four individual artists they're not new to the DJ game. With the recent reveal of their identities at EDC Vegas, the world now knows the ironic truth: as solo artists, three of the four members of Bad Royale have already seen significant prior success - producing trance music. Maor Levi, Kevin Wild and Bruce Karlsson are recognizable names in the land of euphoric progressions and uplifting vocals. With multiple individual releases on labels like Anjunabeats, Spinnin' and Armada, the Diplo-helmed Mad Decent is likely the last place that their respective fans would think to look for future records. But what began as a half-serious side project cooked up with fellow housemate Elias Ghosn one year ago, has become something quite real: Bad Royale have over 30 tracks set to be released by the end of 2015 between Mad Decent and Buygore, and they'll join the latter's label boss Borgore on his fall tour.

Don't miss this opportunity to catch Henry Fong & Bad Royale at this exclusive Atlanta performance! Tickets for this event will sell out! Get yours now! Initial release tickets are available starting at just $15! 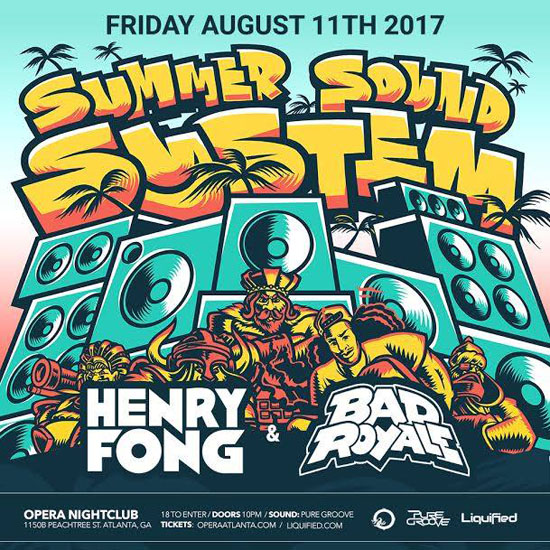