Pre-sale Tickets for Must Die at Opera Atlanta

Opera with My Favorite Sin presents Must Die in Atlanta
Friday, January 23rd, 2015 at Opera Atlanta

The creative mind of US electronic producer MUST DIE! is one that consistently amazes his fans worldwide. Since he began to gather attention across the bass scene in 2011, he has produced a wealth of original material and remixes, releasing on labels such as Never Say Die, Ultra, Dim Mak, Play Me, Mad Decent and Atlantic Records.

Using his naturally artistic and innovative musical intuition, MUST DIE! has quickly risen to recognition with his distinguished level of production. He tours extensively, and has supported the likes of Datsik, Excision and Zomboy to name a few. With a charismatic and outgoing personality alongside his technical proficiency, MUST DIE! will continue to grab attention over the coming months.

The best venues from coast to coast have brought the LA duo out to headline, including Webster Hall (NYC), Sound Bar (Chicago), Create (Los Angeles), and they just recently signed a long term deal with the #1 club in North America, XS Las Vegas, alongside fellow residents Avicii, Deadmau5, David Guetta, Zedd, and Skrillex. Undeniably the fastest growing act in dance music, Must Die is poised to make 2015 their year.

Don't miss this opportunity to catch Must Die at this exclusive Atlanta performance! Tickets for this event will sell out! Get yours now! Initial release tickets are available starting at just $15!

Must Die Live in Atlanta! 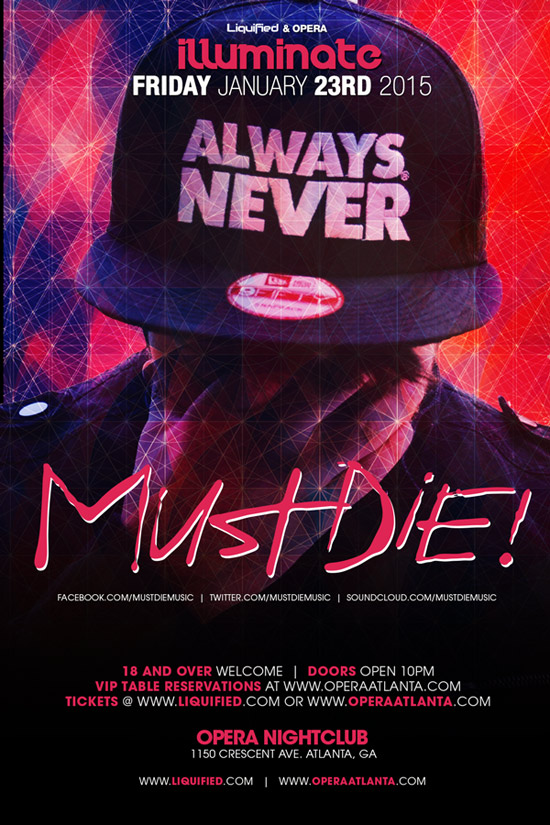