For more than two decades, the world has known Paul van Dyk as one of Germany's most successful musicians and as one of the ultimate superstars of electronic music. As an artist, DJ and producer, Paul has surpassed various milestones over the course of his career, including having sold more than 3.5 million albums and being twice voted the world's No.1 DJ. He has remixed the likes of Madonna, Justin Timberlake, U2 and Depeche Mode. Earning a Grammy nomination and accepting the Order of Merit from the state of Berlin are just two of Paul's numerous accomplishments and accolades for his talents.

His sensational DJ sets attract expansive crowds on every continent. Not only does van Dyk fill the world's best-known venues, but every year he transforms New York's Central Park into a unique open-air festival. His solo, beach-side performance in Rio de Janeiro attracted over one million people, and in May, he took over Londons O2 Brixton Academy for a standout show, whetting the UKs appetite for his forthcoming Summer festival appearances.

Away from the world of music, Paul's extracurricular exploits are without comparison. He grew up in East Berlin and experienced a divided city first-handedly in the former GDR, then beheld such historical events as the of the fall of the Berlin wall and the city's re-unification. World leaders and a television audience of billions recently witnessed Paul's performance of his anthem "We Are One" at the German Reunification ceremony, reiterating his role as a unique ambassador for the dance music community.

Don't miss this opportunity to catch Paul Van Dyk at this exclusive Atlanta performance! Tickets for this event will sell out! Get yours now! Initial release tickets are available starting at just $15! 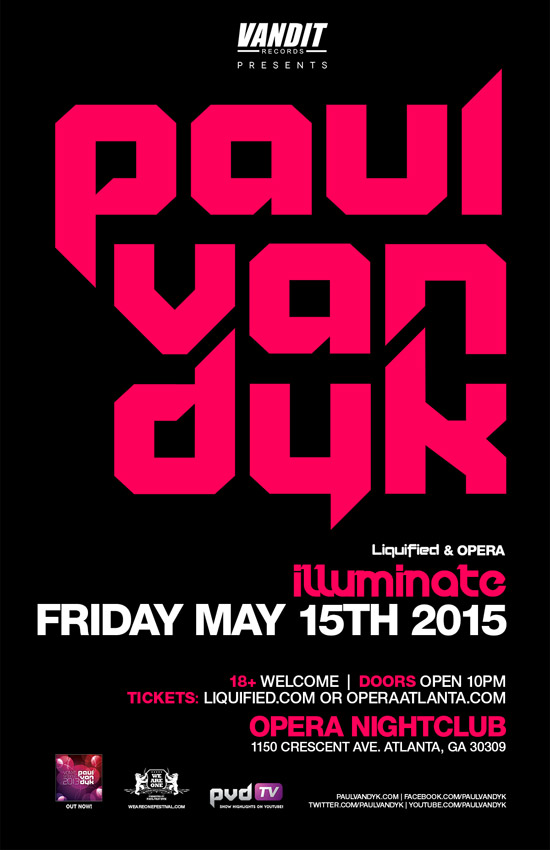