TrollPhace, aka Damon Orienti, has quickly established himself as one of the filthiest and most violent producers in the game. Too complex to be qualified simply as Dubstep, his evil and aggressive sound makes run-of-the-mill bass music appear mild-mannered at worst. Proving to be a momentous year, in 2014 the Atlanta-based producer has already enjoyed: a Reddit shoutout from Skrillex, who instructed fans to, 'Check out this kid...making SICK tunes', a Main Stage appearance at Ultra Music Festival alongside Diplo and Skrillex as Jack U and an OWSLA release. Not to mention the attention TrollPhace has received from some of the industry's heaviest hitters including 12th Planet, Zed's Dead and Datsik.

More than a filthy producer, TrollPhace is a monster behind the decks. His ground-shaking sets seem to beg the question, how violent can we get? Blending together his unique hip-hop influenced and aggressive tracks, TrollPhace leaves crowds begging for more. With a nationwide tour alongside Mantis and Rekoil getting underway and a number of raw and heavy unheard tracks in his arsenal, TrollPhace will without a doubt continue to prove the substance behind his monstrous reputation.

Don't miss this opportunity to catch Trollphace B2B Pogman & Tynan at this exclusive Atlanta performance! Tickets for this event will sell out! Get yours now! Initial release tickets are available starting at just $15! 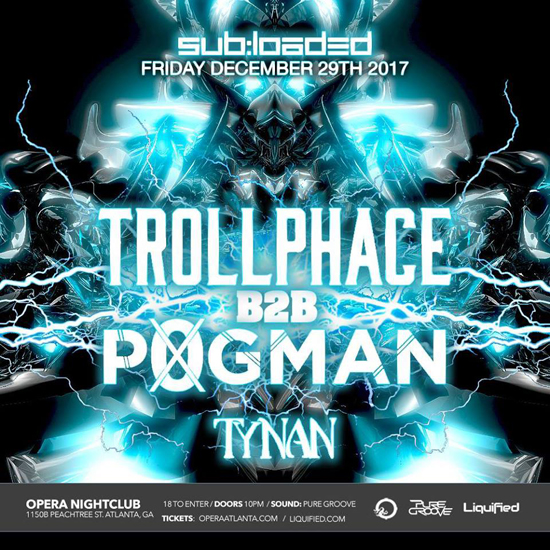