A virtual tour de force on the international club and special event circuit, DJ Spider has been playing the worlds most premiere venues on almost every continent since 2006. Spiders many clients include HBO, 20th Century Fox, SBE, MTV, Red Bull, SoHo House, RANE, Burton, Zumiez, and The Weinstein Company, while hes regularly asked to play high-profile gigs and after parties for the Sundance Film Festival, the Golden Globes, the Academy Awards, Victorias Secret, the Playboy Mansion, and the Superbowl, among others.

There are few DJs that are as sought after as Spider. After concluding a 3-year residency at The Wynn in Las Vegas and countless high profile performances across the globe, its clear to see this DJ has no intention of loosening his overwhelming grip on this ever growing industry.

Don't miss this opportunity to catch DJ Spider at this exclusive Atlanta performance! Tickets for this event will sell out! Get yours now! Initial release tickets are available starting at just $15!

Click on a picture and use the left and right arrow keys to browse the complete set of photos from Tongue & Groove.

The new location of Tongue & Groove is in lower Buckhead near Midtown Atlanta right on Main Street in Lindbergh City Center less than a block from MARTA. It's convenient to the entire city and well worth the drive from outside of the perimeter. 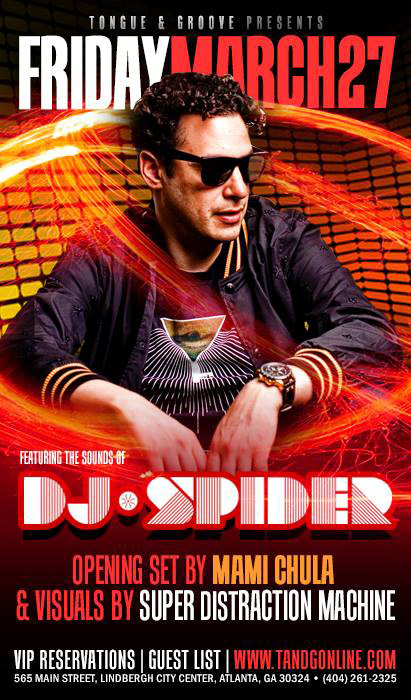