Pre-sale Tickets for DJs From MARS at Tongue & Groove

The Djs From Mars bring the mashup attitude into electrohousethey start remixing big pop hits for their gigs in 2004 just for funIn a couple of years they are recognized as one of the biggest names in the mashup scenetheir videos on Youtube get over 10 millions of views, and the hype is still growing.

The bootlegs are soon noticed by labels all around the world, and they start working on remixes for big pop and dance acts such as Bimbo Jones, Sean Paul, Pitbull, Yves La Rock, Sophie Ellis Bextor, Fragma, Ciara Cascada, Coolio, Ennio Morricone, and many morein the US they start working with Jason Nevins, who brings them some big major acts remixes.

Their tracks are playlisted and supported by undiscussed top djs like David Guetta, Carl Cox, Bob Sinclar and more.

Their goal is to conquer the world... so stay tuned and be aware.

Don't miss this opportunity to catch DJs From MARS at this exclusive Atlanta performance! Tickets for this event will sell out! Get yours now! Initial release tickets are available starting at just $15!

Click on a picture and use the left and right arrow keys to browse the complete set of photos from Tongue & Groove.

The new location of Tongue & Groove is in lower Buckhead near Midtown Atlanta right on Main Street in Lindbergh City Center less than a block from MARTA. It's convenient to the entire city and well worth the drive from outside of the perimeter.

DJs From MARS Live in Atlanta! 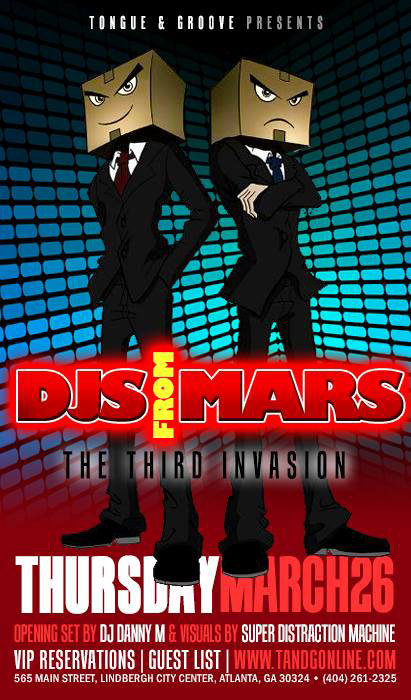